Sam Byron's ANIMALS to be published by Indie Theater Now

Jenna D'Angelo is thrilled to be a part of Animals in FringeNYC.  Since moving to NYC two years ago Jenna has been working consistently in theatre and film.  Theatre: As You Like It (Rosalind), Dracula (Lucy), Thrill of the Chase (MadDog Theatre Co.), Still Jackie (Tiny Rhino), Almost, ( Theatre).  Film: Silent Wave (Best Actress in a Short nomination), Madeleine Zabel (Madeleine, Cambridge Film Festival), Kin, Bruiser, Hello My Name Is (CollegeHumor).  BA: . www.jennadangelo.com

I feel incredibly lucky to be working with Animals again.  I was part of a workshop / reading last year as the character Lisa. This go around I am playing Megan, which has been a blast so far because I get a chance to be in the skin of a different character and see the play in a new light through a new person's eyes.

When I first read the play, I loved it. It has been great to continually work on the play and see how the characters and the story have developed and grown.  Rehearsals have been fantastic.  Kristin [Hoffmann] and Sam [Byron] are so great to work with; they play really well off of one another in the rehearsal room. This is a unique experience because we get to work with the director AND the playwright, which is pretty rare.

I have wanted to be an actor ever since I was a little kid.  I always loved being on stage, telling stories and making people laugh.  In elementary school, I started doing school plays and musicals, and everything sort of took off from there.  I studied Theatre Performance in undergrad at and then moved to NYC after graduating.

Wow.  That is a tough question.  I guess at this point in my life, two years out of undergrad, I would probably say that my professors are still some of the people who have influenced me and shaped the artist I am today the most.  I was really lucky to have just unbelievably talented and passionate professors who helped me to push the limits creatively and keep striving and trying  – if you don't get there today, maybe you will get there tomorrow.
I love rehearsing.  I love what you find when you get to put a scene up on its feet once you are memorized, and really find what is underneath these words that you are saying.  There is nothing more exciting than discovering a moment in a scene that you never knew was there.  In terms of pre-show ritual, it changes from show to show.  Each show you're in places different demands on you and a different energy.  For example, when I do Shakespeare, my warm-ups tend to revolve more around vocals because you are dealing with some really tricky language so you want to be ready for it. Other times, I'll listen to music that helps me get in the right head space, stuff that pumps me up or centers me, I'll do yoga.  It all just depends. For this show?  I'm not 100% sure yet what will fall into place.
My last project was a short film called Kin about a brother and sister who haven't spoken in years and are forced together by the death of their father. The project was wonderful and incredibly challenging – the sister is bi-polar and incredibly reclusive, and I had a great time working to figure her out.

Cool things in my spare time?  I just bought a bike!  And a really goofy helmet!  So now I ride my bike around in my spare time....is that cool? Oh!  And I just hiked the Inca Trail in last month.  That's counts as cool.
I am in a web series called The Fastest that starts filming right around when Animals opens, so I'll be shooting that on my off days.  I play this badass girl-next-door, so that will be fun. I get to use a knife to protect myself from a bad guy.  You can check out some info at http://thefastestseries.tumblr.com/. And I have to finish up some ADR stuff for a film I shot a few months ago called Bruiser with director Mattson Tomlin, who is one of the most talented guys I know.  And then it's time to get back in the saddle again and hit the ground running auditioning.
Posted by animasolaarts at 3:57 PM No comments: 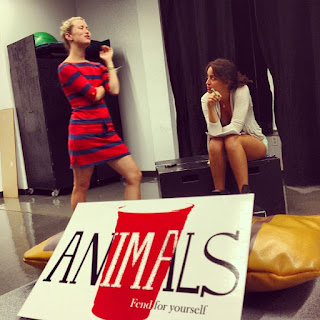 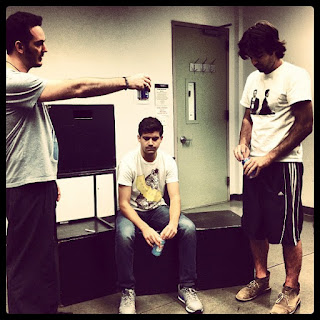 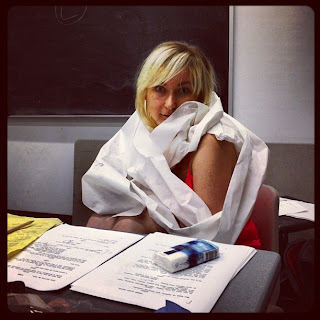 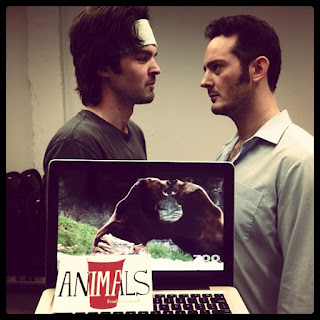 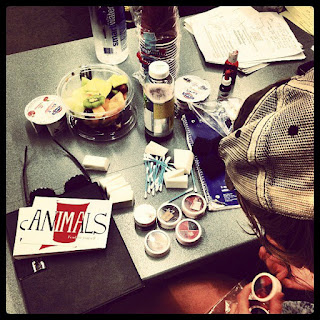 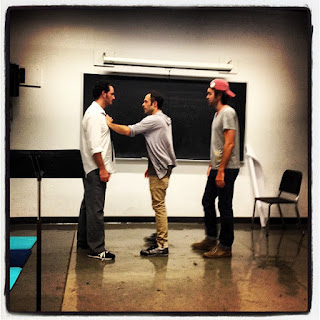 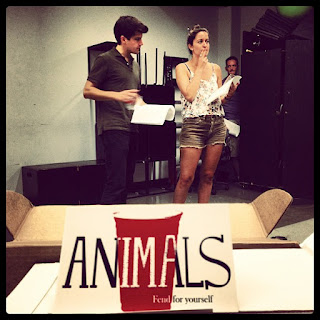 Posted by animasolaarts at 11:00 AM No comments:

ANIMALS in the wild 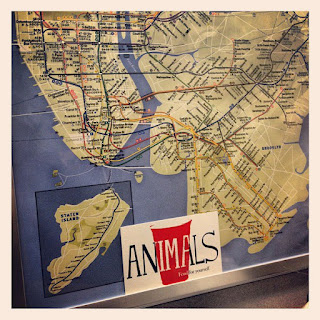 Posted by animasolaarts at 4:19 PM No comments: 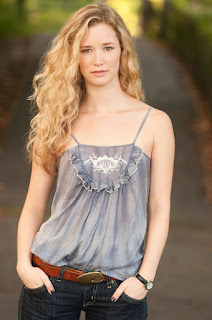 Sarah Jadin New York theater: Edward, My Son, The Late George Apley, The Actor’s Company Theatre; As You Like It, The Midtown Theater Festival. Regional theater: Alice vs. Wonderland, The Donkey Show, American Repertory Theater. London theater: A Winter’s Tale, Much Ado About Nothing, Romeo and Juliet, The Way of the World, The London Academy of Music and Dramatic Arts. MFA in Acting from The ART/MXAT Institute at Harvard University. www.sarahjadin.com


I’m really enjoying working on Animals; Sam [Byron] and Kristin [Hoffmann] are doing such a lovely job with the show, and the cast has proven to be incredibly talented.


I’ve always wanted to be an actor, with the exception of a brief infatuation with Marine Biology in second grade; every girl goes through a dolphin phase, right? So after I lost interest in dolphins, I started acting at Stages Theater Company in my hometown of Minneapolis, and have been ever since.


My biggest creative influences have been my professors and classmates at the ART Institute at Harvard, which is where I went to graduate school for my MFA in acting. Grad school is a fabulous incubator, and Scott Zigler, Marcus Stern, and Nancy Houfek are just brilliant teachers.


Every show is different, but I almost always really love the rehearsal process, by that I mean the time spent in the room with my scene partners and the director.


My last play was my final show at ART, which was a devised piece inspired by the human voice and directed by John Tiffany.  My last “project” was a hair show for the stylist Oribe. I had to wear a huge green wig and matching leotard; it was amazing!
Posted by animasolaarts at 4:58 PM No comments: 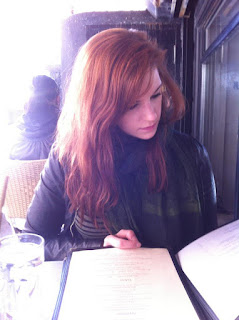 Catherine DiGirolamo A graduate of the Royal Academy of Dramatic Art (RADA), Cate is a Production Manager and Lighting/Scenic Designer who has worked for Gate Theatre Notting Hill, Royal Court Theatre, Almeida Theatre, Hightide Festival Theatre, and Sadler’s Wells Theatre in London, and more recently CAP21 in New York. She is currently the Production Manager for UglyRhino Productions.
What was great about the first table read was getting an idea how fast paced and intense a lot of the play is. It poses a lot of interesting moral questions, bit is also quite funny. These characters and the situations they deal with are very real. Because of that, the set needed to be something that could function for the action but not take anything away from, or interfere with, what is happening in the story. 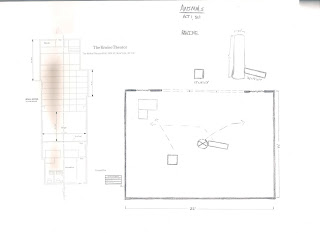 I try not to think about it at first and focus on what I want to achieve creatively and what the play requires. Once I have a clear concept, it’s just a matter of making it work within the constraints, which is equally challenging and fun. There are several locations and transitions in the play, so the design already had to be versatile and easy to transition. Lighting will play a larger role in the overall design, though I won’t get a chance to really see what lighting is available before tech. That is the biggest challenge. It’s important to go in with clear ideas and several options for how to accomplish them.
I’ve had the pleasure of working with, and being close friends with, many talented designers, directors, actors, filmmakers, and artists who have all been great influences. I have also worked on many different projects in a variety of roles and just like being involved in the process in any way. I can’t say for sure when I decided that I wanted to design, but I trained in London and that was the first time I felt that it was something I could pursue. 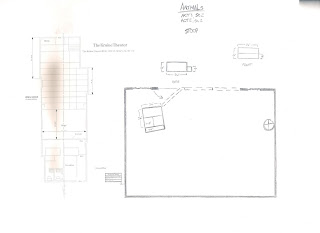 I don’t know that I really have a favorite part. Each project is so unique. I love seeing the progression from the first read through to the stage. Working on Animals, in particular, has been great being able to sit in rehearsals and work closely with the director and playwright, and see how the actors take on these roles. I guess the most fun really comes at tech and seeing everything come together in the space. And I love playing around with lights.
I production manage for UglyRhino Productions in Brooklyn. We’re currently working on our Micro-Season, opening mid-August, which features two new musical plays, parties, and live bands. One play is an adaptation of Kate Chopin’s The Awakening, which I’m also lighting, and the other play is a rock concert/theatrical experience called Glamdromeda. See uglyrhinonyc.com for more information.
Posted by animasolaarts at 2:26 PM No comments: