Was it luck or kismet that brought actors/playwrights Jerrod Bogard and Nat Cassidy together in our upcoming production of Henry VI (Part III)? We'll leave you to muse upon that while listening to the recent podcast they did for nytheatrecast, the voice of nytheatre.com. In addition to discussing their work as playwrights, they talk about Henry at length.

And speaking of Henry VI, we moved from our rehearsal space into the East 13th Street Theatre this very afternoon. At this moment, our diligent load-in crew is hanging lights and wallpapering the back wall of the theatre with a fantastic effigy of Henry V watching over the realm he left to his son. This gigantic poster will be torn down bit by bit so that by the final performance only shreds of what was the previous monach's legacy remains. It promises to be a fantastic evolving and organic statement - one worthy of multiple viewings (or as Nat Cassidy says, Come early and come often).

We are so proud of this production and hope you will enjoy it. Tickets are available here.

Posted by animasolaarts at 5:06 PM No comments:

on the act of creation: Henry VI (Part III) 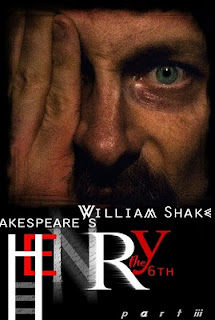 I'm curious about this whole creative process thing, you say. Can you tell me a little bit about what goes on behind the scenes?

Why, yes. Yes, we can. In fact, Adam Marple - the director of our upcoming production, Henry VI (Part III) - has an entire blog dedicated to the crafting of this production and the process of bringing this particular script to life. If you're interested, please feel free to rummage about here.
Posted by animasolaarts at 10:22 AM No comments: 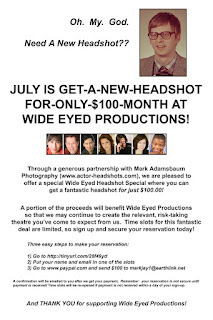 You may have seen it publicized at our party on Saturday, but if not: through generous partnership with photographer Mark Adamsbaum, you can get a new headshot for just $100. As if that were not cool enough, a portion of the proceeds will benefit Wide Eyed. This is a win-win deal! Now, there are only a few timeslots available, so if you are interested:

2) Forward your $100.00 non-refundable payment securely via PayPal to Mark's email address, which is listed on the sign-up sheet.

It's just that simple. Take advantage of this fantastic deal and don't forget to say cheese!
Posted by animasolaarts at 10:22 AM No comments:

Email ThisBlogThis!Share to TwitterShare to FacebookShare to Pinterest
Labels: photography, we love our donors

Pour of the Roses: after report

At the eleventh hour, we met our $5,000 target on Kickstarter! We are so grateful to each and every one of you who made a donation or even just got the word out about our campaign. Our rent on the East 13th Street Theatre is now as good as paid, and our ambitious rendering of Shakespeare's Henry VI (Part III) has a place to play. Tickets are now on sale!

Secondly, our Pour of the Roses party at Stone Creek (our beloved official sponsor) was a rousing success. So much fun and love last night. Drinks flowed freely, the raffle prizes were hot (!) and the set played by local band The Plastic Pets was awesome (they have a gig on Tuesday at Arlene's Grocery, so go check them out if you have a chance).

Thank you again so much for both your interest and support. As Queen Margaret might say, You fight in justice.
Posted by animasolaarts at 9:14 AM No comments:

Email ThisBlogThis!Share to TwitterShare to FacebookShare to Pinterest
Labels: party, we love our donors

10. Wide Eyed has clout in the afterlife, where your good deeds are tallied and used as currency. - Jerrod Bogard, Resident Playwright

9. It's difficult to perform a period piece in torn up All-Stars. - Billy Dutton, Co. Member

8. Because we’re like Tinkerbell, we need applause to live! (No money = No show = No clapping = Death.) - Melissa Johnson, Board Member

7. Because "Coco" landed a gig, so you should be "with Wide Eyed" now. - Billy Dutton, Co. Member

5. You'll be our friend forever, which gets you nowhere but still sounds very nice. - Megan Jupin, Resident Stage Manager

3. So classy you can even introduce Wide Eyed to your Mom. (I did. She had a blast at the Cast Party.) - Solomon Shiv, Co. Member

1: Without your generosity and support, Wide Eyed Productions would disappear.

With 3 days to go in our Kickstarter campaign, we are just $935 away from hitting our target of $5,000! Every donation helps, no matter the increment. Please consider backing our project today!
Posted by animasolaarts at 11:23 AM No comments:

Email ThisBlogThis!Share to TwitterShare to FacebookShare to Pinterest
Labels: we love our donors

Noah’s Arkansas is a heartfelt family drama asking, “What do you save when the water starts to rise?” Wayne Riggins loves his small-town life. He lives in a sweet double-wide trailer with his beautiful second wife, goes fishing with his father, and sees his teenage son three months every summer. But the flood of change is coming, and Wayne has to learn how to swim right fast if he wants to save everything from just washing away.

Some critical praise for Noah's Arkansas:

"the next generation of great American theatre is about to take center stage."
-N. Havey, Huffington Post

"Bogard's script is solid, intelligent, funny, and often profound, and the production,
under the steady hand of director Neil Fennell, is beautifully wrought."
- Martin Denton, NYTheatre.com

"cooks with action and conflict that grips us. This is a high-level professional production"
-Richmond Shepard, Lively-Arts.com

The creative team will include Set Design by Joshua David Bishop, Sound Design by Trevor Dallier, and Costume Design by Antonia Ford-Roberts.

Coming in July, Wide Eyed Productions in collaboration with Columbia University will mount our most ambitious production to date: Shakespeare's most bloody chapter in the War of the Roses, "Henry VI (Part III)." This production, directed by Columbia MFA candidate Adam Marple, is slated to be staged at the prestigious East 13th Street Theatre. It promises to deliver an experience that will truly leave the eyes of our audience wide with wonder.

In bringing this project to life we are faced with an equally epic task of raising at least $5,000 through our Kickstarter campaign by midnight on June 20, 2010. We believe this is possible, but in order for us to reach this goal, we require the assistance and support of our audience.

* Our '09 production, "The Spin Cycle," was published in Plays and Playwrights 2010 (New York Theatre Experience Small Press)
* Wide Eyed commissioned a family musical, "Jack and the Soy Beanstalk,"soon to be published by Baker's Plays at Samuel French
* Wide Eyed Productions was named a NYTheatre.com “Person of the Year”
* Two shows ("A World Elsewhere: Arias in the Key of Clown" and "Jack and the Soy Beanstalk") were well-received at the 2009 New York International Fringe Festival
* Acclaimed productions of "One Flew Over the Cuckoo’s Nest" and the first New York City revival of "The Last Days of Judas Iscariot"

Our ability to continue to create the high caliber of work that you have come to expect from Wide Eyed Productions is contingent upon the generosity of our donors. We hope you will join us in this process!
Posted by animasolaarts at 7:43 PM No comments:

Email ThisBlogThis!Share to TwitterShare to FacebookShare to Pinterest
Labels: we love our donors

You're Invited to the Pour of the Roses 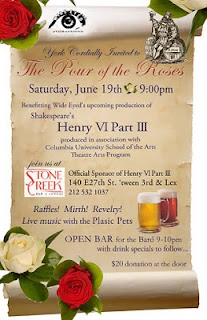 Party like it's 1421! Join us for our Pour of the Roses party to kick off our production of Shakespeare's War of the Roses fueled epic, Henry VI (Part III). Come partake in our open bar from 9-10pm; drink specials will follow. Revelry and amazing raffles will abound (including one for a week's stay at a resort in Mexico)! 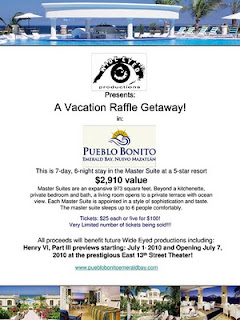 Sign up for a fantastic headshot deal with photographer Mark Adamsbaum! Tuck a red rose behind your ear or maybe dance with a white rose in your teeth to the stylings of our live musical guests, The Plastic Pets! Just don't miss this party: it will be one for the history books...
Posted by animasolaarts at 7:04 PM No comments:

Email ThisBlogThis!Share to TwitterShare to FacebookShare to Pinterest
Labels: party

Well, the hits just keep on coming. Evidently our show made an impression on this theatre goer who posted his observations on the Huffington Post!

"The characters in "Noah's Arkansas" are deftly brought to life under the superb direction of Neil Fennell. His cast of actors give nuanced, natural performances that wrap the audience in from the first line. The coy, lighting-fast, banter between Lizzy (the charming and very funny Kristin Hoffman) and Wayne (the powerful Justin Ness) sets the pace for the rest of the evening."

Check out the article by clicking here: Noah's Review at the Huffington Post

Posted by The Lexiconnoisseur at 10:12 AM No comments: