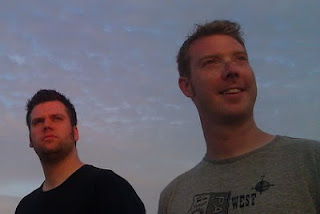 White Liars – the web series written, directed, shot and starred in by Wide Eyed company and board members Andrew Harriss and Neil Fennell – launches its second season with a new episode on September 29. While not a direct project of Wide Eyed Productions, the web series has featured the talents of many of our company members. We caught up with Andrew and Neil to discuss their project. Be sure to check out the Season 2 trailer on youtube (you can also watch it below)!
ANDREW: The seed of White Liars came from my cousin, Adam Harriss, who basically gave me a situation and a few lines of dialogue which I used as my starting point, and are the first lines of dialogue in the first episode. The idea of spending the amount of time and money that it would take to produce a web series was overwhelming to me at the time, so I put off writing the first episode for about eight months until I thought, why not? That’s when I approached Neil to direct and Justin Ness to play [the character of] Chet, and we finally sat down and talked about it about three months after that.

NEIL: Andrew brought the script to me and asked if I would direct it. We sat down for a production meeting and ended up mapping out all eight episodes of the first season. Then Andrew wrote script by script, and we shot as we went, episode by episode. We were pretty green in the beginning, and definitely picked up steam with more experience.

ANDREW: I had no idea what the show was going to be about other than con artists. I thought a lot about the concept of lies, and how easy they are to tell to ourselves and others, how comfortable we can be with lies, and how when we convince ourselves of a lie, sometimes we can just go ahead and proceed as if this fiction we’ve created for ourselves is true. There’s a lot of humor there and commentary, too.

Adam wanted it to be a little more like the office. He comes from the corporate world, and I don’t even have a stamp on my passport for the corporate world, so making Tim (my character) an actor and keeping the corporate world vague was a product of my personal experience. That was pretty much the point we were at when Neil and I sat down and talked through the season.
ANDREW:  In a nutshell, White Liars follows the exploits of Tim, a down on his luck New York actor in need of a job and his friend Chet, who has lots of jobs. Their journey takes a satirical look at the world of business, non-paying theatre, and the little white lies that end up becoming much bigger down the road.
ANDREW:  Season 2 is a continuation of the narrative of Season 1. At the end of Season 1, we see Tim turn from a pawn to a player in the game. The game changes very quickly in Season 2 as the consequences of Tim and Chet’s actions start to catch up with them. There’s still plenty of lying, though…Lots of lying. That’s very important in our show. The quality is much better, too. The lessons we learned on Season 1 bear their fruit this time around.

NEIL:  Season 2 is so much tighter. It’s fast-paced; it’s funnier; the performances are fantastic. Plus, we’ve just gotten better at it. The planning was far more extensive, the camera covers more, and it’s on a much grander scale. People will be very interested to see where the story goes.
NEIL:  Well, I can reveal that a good friend of ours is a Steadicam operator, and we got to utilize his talents for a shot in Season 2. That was an incredible experience, utilizing 15 people for one long moving shot. I had never got to direct something like that before - it was so much fun. Anything else, you’ll have to wait and see.

ANDREW: I do love the Steadicam shot, but I have to say, even though I’ve only seen some of the raw footage, I think the finale has some of my favorite moments and shots of the entire series. They’re beautiful.
NEIL: I always hoped that we could do original music for the series, since I’m a musician. I also hoped that we didn’t have to use outside sources due to rights, etc. We wanted to create something original that had our own kind of feel. Luckily, we have fellow company member Sky Seals, who works wizardry. We have a lot of fun, the three of us in a room, coming up with original themes for the show.

ANDREW: I’ll just say that when you have people who are willing and eager to help you out, you should make use of them. I didn’t even think about music until we’d started shooting, but when it came time to score the episodes it became very clear that the music had to tell as much of the story as the rest of the components. I think it’s wonderful and can’t sing Sky Seals’s praises enough for the work he did (and is continuing to do) to bring a musical life to our story.
NEIL: I like that we’re friends first…We work together because we like each other. It’s hard enough to do this without an underlying friendship, and lord knows we can get stressed with/at each other at times. I’d hate to think what it was like working on a project of this scope with someone that I DIDN’T like.

ANDREW: I like what Neil said. Same goes for me.
NEIL: I’m currently editing Wide Eyed Productions’s short film The Return of Toodles Von Flooz. It’s been on the back burner far longer than I care to admit, but we have a timetable in place and people should keep an eye out for it soon. Other than that, I enjoy the few hours a week I get to sleep.

ANDREW: Smaller, more sketch based videos in 2013! And maybe a nap.

Posted by animasolaarts at 10:21 AM No comments: